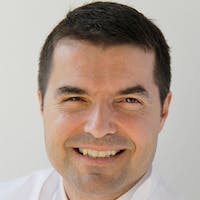 Professor Biberthaler’s research activities concentrate on his core clinical focus areas. A very important aspect of these focus areas is the care of severe and multiple trauma patients, a major part of which is the treatment of traumatic brain injuries. Professor Biberthaler’s other major focus area, shoulder surgery, is the logical consequence of his scientific research and clinical practice in the field of traumatology. He is the first person to have been able to visualize the blood circulation in direct proximity to ruptures by means of intraoperative intravital-microscopic imaging.

After completing his medical studies at LMU Munich, Professor Biberthaler spent time abroad in the USA and Brazil. On his return he started his surgical training under the supervision of Professor Schweiberer at the Surgical Clinic at the city centre campus of LMU Munich. Having successfully completed his training leading to German medical board certification in surgery in 2003, Professor Biberthaler went on to specialize in trauma surgery. In 2007 he acquired his German medical board certification in orthopedics and trauma surgery. He assumed the position of full professor and department chair at TUM in 2011.

The Basics of Trauma Surgery