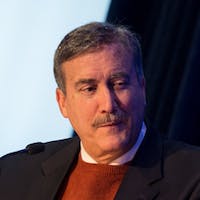 Larry J. Sabato is the founder and director of the renowned Center for Politics at the University of Virginia. He is also the University Professor of Politics there, and has had visiting appointments at Oxford University and Cambridge University in Great Britain. A Rhodes Scholar, he received his doctorate from Oxford, and is the author or editor of two dozen books on American politics, including The Rise of Political Consultants, Feeding Frenzy, A More Perfect Constitution, Barack Obama and the New America, and the New York Times bestseller, The Kennedy Half Century.

Dr. Sabato is a well- known election analyst who has appeared on television news shows hundreds of times. In 2014 he won an Emmy for the television documentary The Kennedy Half Century, based on his research in the book. He also won an Emmy in 2013 for the documentary Out of Order. He directs the Crystal Ball website, which has an unparalleled record of accuracy in predicting U.S. elections. Sabato has taught tens of thousands of students, and has received every major teaching award at the University of Virginia, which has also given him the University’s highest honor, the Thomas Jefferson Award. For more information, visit the Center for Politics website at www.centerforpolitics.org.

The Kennedy Half Century